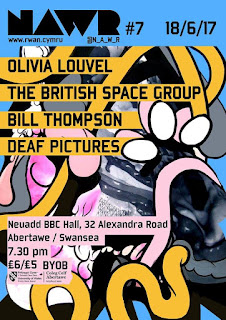 Slightly short notice but I've only just realised that I hadn't mentioned this on the blog.

I will be playing live - which is something that doesn't happen very often at all - on Sunday 18th June at the old BBC studios in Swansea.

There are three other acts on the bill.  I know the Deaf Pictures guys but the others are new to me so I've been checking out some of their videos and it looks like it's going to be a fun night.

Peace
Ian
Posted by ian holloway at 23:27 No comments: 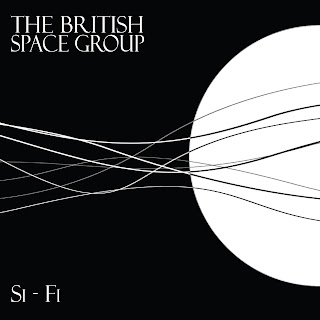 You may have noticed it's been a bit quiet around here of late which is due to me being a little poorly.

I've a long time recurring problem with my nose that has flared up worse than ever and has meant I've not been able to breathe through it for the last 8 months.  Also it has meant that my hearing has been effected resulting in horrendous tinitus and periodic deafness in my right ear.

The doctors keep swapping my meds  around until i can get time with the consultant so some days / weeks are worse than others.  The last few weeks have been pretty good and to celebrate I made a video for my track from the Hope Not Hate comp.

I hope you enjoy.

Posted by ian holloway at 22:40 No comments: 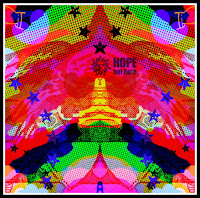 The first review of the HOPE not hate compilation is in and includes the following sentence which has pretty much made my day.

"The British Space Group’s ‘Si-Fi’ is an addictive slice of psychetronica very much in the tradition of Delia Derbyshire’s radical experimentation."

Thank you to Gus and to Louder Than War.

The album is here...

Posted by ian holloway at 16:00 No comments: 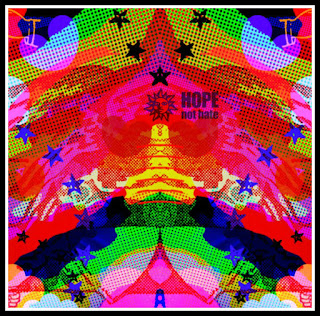 Out today is a new charity compilation in aid of HOPE not hate that features a brand new tune from The British Space Group called 'Si-Fi'.  I'm in fine company too as the comp also features a fab Chris & Cosey tune, Portishead's Geoff Barrow's Beak> project, Welsh punk legends Anrehfn, my good friend Adrian Shenton and so much more.

This is a compilation album to raise funds and exposure for the charity HOPE not hate. The concept behind the album is to show that however diverse the artists included are musically they all share a common goal which is one for peace and tolerance. Every penny raised goes towards HnH. For more information visit hopenothate.org.uk

You can stream and buy the album via the player below.

Posted by ian holloway at 10:21 No comments: 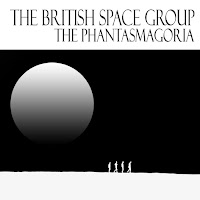 Very pleased to be able to share with you all the lovely words of Mr. Grey Malkin of the very fine The Hare and the Moon writing in The Active Listener who has kindly given 'The Phantasmagoria' the most glowingest of glowing reviews.

'With 'The Phantasmagoria' The British Space Group have created something that feels inexplicably familiar yet also unique and compellingly unusual. The fact that these pieces come from different EPs is lost as the album continues, they expertly morph and merge into an effective and engaging whole that is wholly transportive'

You can read the full review here -
http://active-listener.blogspot.co.uk/2016/07/the-british-space-group-phantasmagoria.html?m=1

Posted by ian holloway at 17:17 No comments:

Email ThisBlogThis!Share to TwitterShare to FacebookShare to Pinterest
Labels: review, The Active Listener, The British Space Group, The Phantasmagoria

Fractures, both real and auditory 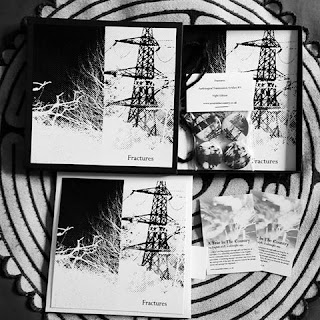 Some of you may know that back in July 2015 I took an unplanned short cut down a flight of stairs breaking various bones, my tibia in particular.  Surgery ensued and everything was nailed back together and much of the last 11 months has been dedicated to recuperation and physiotherapy and learning how to walk again to the point where I was just using a stick when I was out and about.

Until that is three weeks ago when my leg decided to give way on me at the top of a flight of steps and I crashed to the bottom breaking my bloody hip this time. And yes, you've probably guessed, the same leg.  So, more surgery, more nails and the stick goes and sits in the corner and I'm back on crutches for the next, hopefully short, while.

There have, of course, been good things too and one of those is happening today with the release of the latest compilation from the very fabulous 'A Year in the Country' blog which features an exclusive British Space Group track called 'An Unearthly Decade'.  The name of this compilation that I'm writing to you about whilst nursing my broken leg, would you believe 'Fractures'.  Oh irony how I love you.

As with all the compilations in the series the album is based on a theme,  for this one it was '1973'.

Most of the themes sounded intriguing but I knew due to what had happened and my then imminent return to work I was only really going to be able to commit to one of the releases so I chose the one that caught my eye the most.

So what happened in 1973 well, it was the 10th anniversary of Doctor Who and musically it's also the point where glam rock is becoming well and truly established (or 'dead' according to Marc Bolan) so I started to wonder about what it would have sounded like if the BBC had demanded that Doctor Who had adopted a glam rock strut alongside it's customary bleeps and boops.

The finished version is available today along with a plethora of other goodies from some friends - Keith Seatman, Grey Malkin (The Hare and the Moon), Paul Snowdon (Time Attendant) and David Colohan - and some fellow travellers  - The Rowan Amber Mill, Listening Centre and more.

The album is available in various beautifully packaged editions plus as a download from the ubiquitous Bandcamp page below.

I hope you enjoy.

Posted by ian holloway at 13:41 No comments:

Email ThisBlogThis!Share to TwitterShare to FacebookShare to Pinterest
Labels: A Year in the Country, Bandcamp, Fractures, music, The British Space Group

A lovely review of 'The Phantasmagoria' has been posted by Simon Tucker on the Louder Than War site.

Thanks folks I am truly chuffed.

[extract]
'With these EPs Ian has collected a wealth of material that deserves to be heard by all that love the esoteric and the magnificent. The sheer depth and breadth of the music here means you can guarantee repeat listens where you will always discover something new. A soundtrack anthology to a as-yet-unmade series of films, The Phantasmagoria collection needs to be in your collection.'
http://louderthanwar.com/british-space-group-phantasmagoria-collected-phantasms-eps-review/

'The Phantasmagoria' is available on disc and download from the Quiet World Bandcamp page.

Posted by ian holloway at 18:50 No comments: